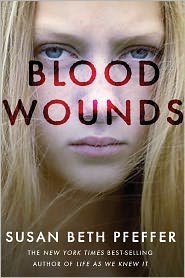 Published by Harcourt Children’s Books
Released September 12, 2011
256 pages
Where I got it: ARC obtained at BEA from the publisher
Rating: 4 stars

Willa has always felt like she needed to do her best and stay under the radar.  Living with her mother in a house paid for by her step-father’s ex-wife for Willa’s step-sisters, she’s always done without while her step-sisters had whatever they wanted.  Willa never knew her father, and so it comes as a surprise when she learns that he has just killed the half-sisters and step-mother she never knew she had.  Now the country is scandalized by the horror he has brought down upon his family, and Willa feels the urge to understand.  She wants to know who her father was, her mother’s secrets, and if she has any of his bad blood inside of herself.

Blood Wounds is a really terrifying and touching story because it is the kind of thing that happens all the time, yet we all think it could not happen to us.  Murder-suicides are a sad fact of life in 20th and 21st century America.  This book takes a look at those who are left behind to pick up the pieces after one of these terrible events occurs.  It also shows the way that some people want to blame the family of the murderer, although they aren’t the ones at fault.  Willa never even knew her father, yet the townsfolk look down on  her just for having been his daughter. It’s a good lesson to remember when we read about these kinds of crimes in the newspaper.

Reading through the story, you really feel for Willa and her situation. Things weren’t great for her even before her father went on his murder spree, with her being the poor daughter next to two spoiled step-sisters. Things are even worse now: her school views her as the daughter of some hick killer, while her father’s hometown sees her as the rich daughter who left and never looked back. There’s a lot of family drama at play, and most readers will be able to relate to a relationship at some level, even if you didn’t grow up in a household like the one presented. The conflicts are universal.

This book is heartbreaking, so don’t go into it looking for laughs. I was really glad that the storyline wasn’t complicated by some romance, which would have cheapened the drama. Blood Wounds was a heartbreaking book to read, but still drew me in and made me think.

This entry was posted in YA Book Reviews and tagged BEA, contemporary, review, YA fiction. Bookmark the permalink.