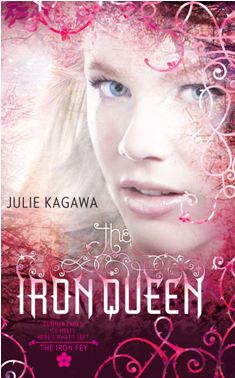 Published by Harlequin Teen
Released January 25, 2011
358 pages
Where I got it: Public library
Rating: 4 stars

*Warning*  Spoilers ahead if you have not read the first two books in the series.  If you have, please proceed.

In the first book of this series, our heroine, Meghan Chase, ventures into Faery to rescue her brother, and finds that she is the daughter of Oberon, King of the Summer Fae.  She travels into the Iron Realm, which is poisoning Faery, and defeats the Iron King to save her brother.  Book two tests Meghan by having her love, Prince Ash, captured by the Iron Fae, while a war is brewing between the Winter and Summer courts, with Meghan at the center.  In the most recent book, the stakes are even higher as Meghan must defeat the impostor Iron King, stop the spread of the iron sickness, and save all of Faery.

Kagawa has once again written a fast-paced, fun, exciting fantasy novel that will keep readers guessing at every turn.  Ash and Meghan are finally able to be together, but that doesn’t mean that life is easy for them.  They are living as exiles of the Faery realm, and must also avoid being kidnapped by a faction of the Iron Fae while in the human world.  The plot climaxes in a series of battles that are more intense than anything that has come before in the series.  The final showdown between Meghan and the false Iron King (I don’t think I’m spoiling too much there, because you know it’s going to happen) is satisfying.  And I may have been dense, but I did not guess the false Iron King’s identity until it was revealed to the reader.

Meghan really comes into her own in this book.  She learns, she takes charge of situations, and she is able to care deeply for those around her and to unite, at times, with her enemies.  All in all, she’s a great female protagonist.  I really appreciate that she and Ash manage to avoid falling into Bella-Edward relationship stereotypes.

The support characters are strong here, as well.  As always, I love every scene that involves Grimalkin, and Puck is also fun to read (although maybe not as much as in the first book).  Some new minor characters are introduced, including a really spunky, cute one named Razor.

This is probably the darkest book in the series, but that also makes it the most intense, and, I think, satisfying.  We are left on a bit of a cliffhanger, so you’ll be chomping at the bit with anticipation for The Iron Knight, set to be released this coming fall.  The Iron Fey is a strong series, and not to be missed by fans of fantasy.

This entry was posted in YA Book Reviews and tagged fairies, fantasy, review, series, YA fiction. Bookmark the permalink.