I had another super busy week, but what else is new? I started Latin on Wednesday, and then had a 3 hour jazz band rehearsal Thursday night. On Saturday, I went with some of my band friends to the University of Massachusetts v. University of Maine football game (I went to neither school, so I was neutral). We tailgated and barbecued and walked to Gillette Stadium from my friend’s house.

Me with my friends at the game (I’m the girl).

Today (Sunday), I drove down to Providence, RI with my boyfriend to watch Evita. It was incredible! It was the very first show of the new national tour, so I recommend seeing it if it comes to your city. All of the cast was amazing, the sets were the best my boyfriend said he’d ever seen, and the dancing was also gorgeous. Something for everyone

Finished:
I Can Barely Take Care of Myself: Tales From a Happy Life Without Kids by Jen Kirkman
Between the Devil and the Deep Blue Sea by April Genevieve Tucholke
Fire and Ash by Jonathan Maberry

Continuing to read:
The Waking Dark by Robin Wasserman (my egalley expired, so I’m waiting for it to come out)
Dexter’s Final Cut by Jeff Lindsay
Haunted Asylums, Prisons, and Sanatoriums: Inside Abandoned Institutions for the Crazy, Criminal & Quarantined by Jamie Davis

What are you reading this week?

Being the crazy woman I am, I am going to start Beginning Latin on Wednesday nights at Harvard Extension, after work. I’ve never taken Latin before, and it wasn’t offered at my high school. However, since I’m a rare book cataloger, it’s really something I should have on my resume. Some jobs require it.

Beside helping me master the English language, which contains many Latinate words, there’s something inherently sexy about knowing a language that is so old and so widely used. There’s a reason rare book catalogers need Latin: a ton of books, mostly pre-1750s, are written in it. 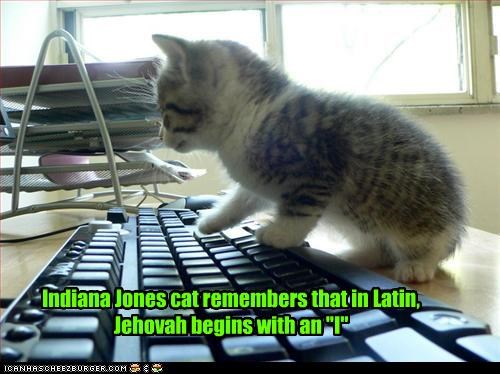 Latin has played an important role in many of the books I’ve read in recent years. For example, in The Raven Boys and The Dream Thieves by Maggie Stiefvater. Not only do the boys take Latin in school, but Ronan’s dreams are in Latin.

Holly Black wrote about a Latin club that has an unexpected dark side in the short story “In Vodka Veritas” (in vodka there is truth), which appeared in her book The Poison Eaters and Other Stories. I remember reading it and really longing to learn Latin. Then the story took a strange turn. You’d need to read it to know what I mean.

Robin Wasserman’s The Book of Blood and Shadow features a protagonist who is a Latin whiz. That’s the reason she gets set on the path she does. Without Latin, there wouldn’t be a plot in this book.

Have you taken Latin? Is this going to be intellectual torture for me, or something magical? What books have you read that feature Latin as a plot point? Let me know in the comments!

I love Labor Day weekend. It’s so nice to have a three day weekend to end the summer and kick off fall. I even baked apple pumpkin bread for the occasion, and got a pumpkin spice frappuccino at Starbucks. I’m finishing off the three day weekend tomorrow by playing a concert at the local VA Hospital with one of my bands I play with. The fall promises to be a very full, but very good one.

I played two concerts last weekend, and saw the new Simon Pegg/Nick Frost/Edgar Wright film The World’s End yesterday. It’s a great movie. If you’re a Shawn of the Dead fan, you won’t want to miss it.

This coming Wednesday I start taking Latin at Harvard Extension. I’m both excited and a little nervous, but I’ll be taking it along with an awesome work pal, so that has me really looking forward to the class.

Finished:
The Dream Thieves by Maggie Stiefvater
Blood of the Lamb by Sam Cabot
The Outside by Laura Bickle
Wicked Cruel by Rich Wallace

Continuing to read:
The Waking Dark by Robin Wasserman (my egalley expired, so I’m waiting for it to come out)
Dexter’s Final Cut by Jeff Lindsay
Haunted Asylums, Prisons, and Sanatoriums: Inside Abandoned Institutions for the Crazy, Criminal & Quarantined by Jamie Davis
I Can Barely Take Care of Myself: Tales From a Happy Life Without Kids by Jen Kirkman (had to return to the library. Now I’m waiting to get it back)

Hoping to finish:
Between the Devil and the Deep Blue Sea by April Genevieve Tucholke
Fire and Ash by Jonathan Maberry

Reviews posted:
Blood of the Lamb by Sam Cabot
The Ghosts of Chicago: The Windy City’s Most Famous Haunts by Adam Selzer

What are you reading this week? Do you have any plans for fall?

Review: Blood of the Lamb by Sam Cabot

Published by Blue Rider Press
Released August 6, 2013
432 pages
Where I got it: E-galley received from publisher via NetGalley
Rating:

The Historian meets The Da Vinci Code in this exhilarating supernatural thriller set in Rome, where rival groups are searching for a document that holds a secret that could shatter the Catholic Church.

This document, dear friend, will shatter the Church…..

Reading these words in a letter in a dusty archive, Thomas Kelly is skeptical. The papers to which they refer have vanished, but Father Kelly, a Jesuit priest, doubts anything could ever have had that power—until the Vatican suddenly calls him to Rome to begin a desperate search for that very document.

Meanwhile, standing before a council of her people, Livia Pietro receives instructions: she must find a Jesuit priest recently arrived in Rome, and join his search for a document that contains a secret so shocking it has the power to destroy not only the Catholic Church, but Livia’s people as well.

As cryptic messages from the past throw Thomas and Livia into a treacherous world of art, religion, and conspiracy, they are pursued by those who would cross any line to obtain the document for themselves. Thomas and Livia must race to stop the chaos and destruction that the revelation of these secrets would create. Livia, though, has a secret of her own: She and her people are vampires.

In a sprawling tapestry that combines the religious intrigue of Dan Brown with the otherworldly terror of Stephenie Meyer, Blood of the Lamb is an unforgettable journey into an unthinkable past.

Blood of the Lamb is another example of a biblio-mystery that promises to reveal a particularly damning secret of the Roman Catholic Church. Also, there are vampires. One vampire must team up with a priest in order to uncover where the important document is hidden. Church by church, they solve clues in a scavenger hunt for the truth.

I had fun reading Blood of the Lamb, probably because I didn’t go into it with high expectations. Characters fall into stereotypical roles, and there are no real surprises throughout the plot or with the characters. There is one unfortunately one-dimensional bad guy who trails our heroes like a single-minded bloodhound, and I found myself trying hard not to just roll my eyes every time he appeared. He is laughably bad, and fulfills a bit of the albino’s role from The Da Vinci Code.

The best part of this book was how it takes place in Rome, at various churches, and made me really want to visit the city. As somebody who has art historical training, the descriptions made me long to go and check out the architecture, sculptures, and reliquaries for myself. Also, vampires.

If you liked The Da Vinci Code, you should give this book a try. You’ll probably like it. I found it satisfying as genre fiction and as a light, fun adventure.

Get it on Amazon

Review: The Ghosts of Chicago: The Windy City’s Most Famous Haunts by Adam Selzer

Published by  Llewellyn Publications
Released September 8, 2013
360 pages
Where I got it: E-galley received from publisher via NetGalley

From Resurrection Mary and Al Capone to the Murder Castle of H. H. Holmes and the funeral train of Abraham Lincoln, the spine-tingling sights and sounds of Chicago’s yesteryear are still with us . . . and so are its ghosts.

Seeking to find out what we really know about the ghastly past of this famously haunted metropolis, professional ghost hunter and historian Adam Selzer pieces together the truth behind Chicago’s ghosts, and brings to light never-before-told first accounts. Take a history tour like no other of the famous and not-so-famous haunts around town. Sometimes the real story is far different from the urban legend–and most of the time it’s even gorier.

I lived in Chicago for an academic year, but didn’t make it off of the University of Chicago campus very often. Reading The Ghosts of Chicago made me wish I’d have explored the city more, or at the very least, taken a tour. Author Adam Selzer is a tour guide for haunted Chicago tours, and while I doubt he was in operation while I was attending classes there, I think I would have really enjoyed taking one of his tours. I got the next best thing, though: this book.

Selzer takes the reader through Chicago’s neighborhoods and historic spots, bringing to light ghosts both real and legendary. I learned about the history of Chicago through his description, and he explains how the city grew and how streets and neighborhoods changed over time. I have little doubt that he’s actually done some research on the physical locations, working to pinpoint historic addresses that have long since changed.

Selzer’s interest in ghost hunting seems to mirror my own. I’m not interested in things like K2 meters or orb photographs. I don’t need to use technology to tell me a place is creepy. Rather, I’m interested in doing what Jeff Belanger calls “legend tripping,” or visiting spots where legends and stories have developed. I care about the history and the stories people tell. Adam Selzer’s book really scratched that itch for me.

The Ghosts of Chicago works as a combination of ghost stories, history, and travel guide. You don’t need to be familiar with Chicago to read and enjoy it, and if you’re going to visit, you may want to have this book on hand to look up some interesting spots (or, if you’re not into ghosts, to know where to avoid!).

Buy it on Amazon