Review: Dark Inside by Jeyn Roberts 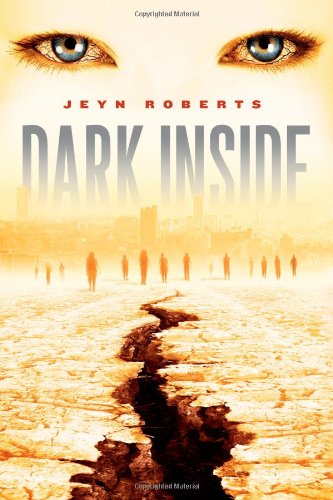 When massive earthquakes hit around the world, that’s only the beginning of the disaster. People are different now–somehow, something was unleashed that opened many up to their darkest desires and made them crave violence. Now, four teens are all trying to survive as best they can in the face of the apocalypse, where you can trust nobody, and the good are killed quickly while the evil thrive.

Dark Inside is an ambitious novel that never quite grabbed hold of me as a reader. It had all the elements that I’d normally crave: the stories of specific people in dire straights, creepy monster-like villains around every corner, dramatic tension, a disaster scenario. What it didn’t have for me, though, was heart. There was just something about this book that never managed to get under my skin, to cause me to really care for the various protagonists involved. Maybe it’s because I didn’t have much of a backstory for any of the characters, since the story starts at about the point where the initial disaster occurs. Or, it could just be that the characters themselves never felt 100% likable or full.

The writing was good, overall, and I enjoyed Roberts’ ability to build up a sense of dread in nearly every chapter of the book. I do think that there could have been more releases of that dread along the way in order to keep building without overtaxing the reader. It was maybe just too much of a good thing in that way. And not to give anything away, but the ending was a disappointment to me. It felt unresolved, and I walked away with no feeling of hope or closure. Again, just more of that dramatic tension that’s on every page of this novel.

If you’re a fan of very dark books about the worst that humanity has to offer, this is the book for you. I’d say it’s also worth reading if you’re a fan of apocalyptic stories and want to read them all.

This entry was posted in YA Book Reviews and tagged apocalypse, horror, review, YA fiction. Bookmark the permalink.

3 Responses to Review: Dark Inside by Jeyn Roberts