Welcome again to In My Bookbag. This is my version of In My Mailbox, a weekly meme hosted by The Story Siren.

This was another successful week for library books. 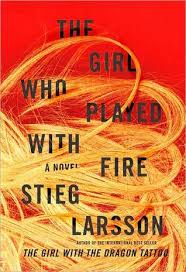 My current audiobook downloaded from the library Overdrive site is the very popular The Girl Who Played with Fire by Stieg Larsson.  So far, I’m liking this book much more than the last.  The focus of the story is more on Lisbeth, and it just seems like there’s less extraneous background info than in the last book.

Mikael Blomkvist, crusading publisher of the magazine Millennium, has decided to run a story that will expose an extensive sex trafficking operation. On the eve of its publication, the two reporters responsible for the article are murdered, and the fingerprints found on the murder weapon belong to his friend, the troubled genius hacker Lisbeth Salander. Blomkvist, convinced of Salander’s innocence, plunges into an investigation. Meanwhile, Salander herself is drawn into a murderous game of cat and mouse, which forces her to face her dark past.

Now for the physical books I picked up from the public library:

The False Princess by Eilis O’Neal.  This one will count toward the 2011 Debut Author Challenge.

Princess and heir to the throne of Thorvaldor, Nalia’s led a privileged life at court.  But everything changes when it’s revealed, just after her sixteenth birthday, that she is a false princess, a stand-in for the real Nalia, who has been hidden away for her protection.  Cast out with little more than the clothes on her back, the girl now called Sinda must leave behind the city of Vivaskari, her best friend, Keirnan, and the only life she’s ever known.

Sinda is sent to live with her only surviving relative, an aunt who is a dyer in a distant village. She is a cold, scornful woman with little patience for her newfound niece, and Sinda proves inept at even the simplest tasks.  But when Sinda discovers that magic runs through her veins – long-suppressed, dangerous magic that she must learn to control – she realizes that she can never learn to be a simple village girl.

Returning to Vivaskari for answers, Sinda finds her purpose as a wizard scribe, rediscovers the boy who saw her all along, and uncovers a secret that could change the course of Thorvaldor’s history, forever.

Nina Oberon’s life is pretty normal: she hangs out with her best friend, Sandy, and their crew, goes to school, plays with her little sister, Dee. But Nina is 15. And like all girls she’ll receive a Governing Council-ordered tattoo on her 16th birthday. XVI. Those three letters will be branded on her wrist, announcing to all the world–even the most predatory of men–that she is ready for sex. Considered easy prey by some, portrayed by the Media as sluts who ask for attacks, becoming a “sex-teen” is Nina’s worst fear. That is, until right before her birthday, when Nina’s mom is brutally attacked. With her dying breaths, she reveals to Nina a shocking truth about her past–one that destroys everything Nina thought she knew. Now, alone but for her sister, Nina must try to discover who she really is, all the while staying one step ahead of her mother’s killer.

My Soul to Steal by Rachel Vincent

I’ve read and enjoyed the three earlier books in the series.  I want to see how Kaylee deals with Nash in this one.

Trying to work things out with Nash—her maybe boyfriend—is hard enough for Kaylee Cavanaugh. She can’t just pretend nothing happened. But “complicated” doesn’t even begin to describe their relationship when his ex-girlfriend transfers to their school, determined to take Nash back.
See, Sabine isn’t just an ordinary girl. She’s a mara, the living personification of a nightmare. She can read people’s fears—and craft them into nightmares while her victims sleep. Feeding from human fear is how she survives.
And Sabine isn’t above scaring Kaylee and the entire school to death to get whatever—and whoever—she wants.

The Lost Saint by Bree Despain

I’m looking forward to seeing where this series goes.

The non-stop sequel to The Dark Divine delivers an even hotter romance and more thrilling action than Bree Despain’s first novel.  Grace Divine made the ultimate sacrifice to cure Daniel Kalbi.  She gave her soul to the wolf to save him and lost her beloved mother.  When Grace receives a haunting phone call from Jude, she knows what she must do.  She must become a Hound of Heaven.  Desparate to find Jude, Grace befriends Talbot – a newcomer to town who promises her that he can help her be a hero.  But as the two grow closer, the wolf grows in Grace, and her relationship with Daniel begins to crumble.  Unaware of the dark path she is walking, Grace becomes prideful in her new abilities – not realizing that an old enemy has returned and deadly trap is about to be sprung.  Readers, raveous for more Grace and Daniel, will be itching to sink their teeth into The Lost Saint.

This entry was posted in Uncategorized. Bookmark the permalink.